Around 90 people, a dozen dogs and a duck turned up for Hythe & Waterside Rotary’s sponsored walk on the Beaulieu Estate.

A pleasant break in the unsettled weather saw the walkers (and waddler) set off in good spirits to follow either a 5k or 8k route that took them through open meadows, secluded woodlands and some really picturesque scenery following paths which most people do not normally have access to, but which were marshalled for the event by members of Hythe Rotary. 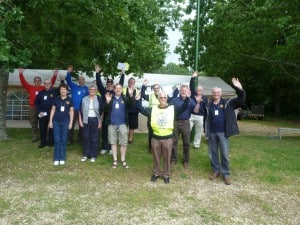 After completing the walk, everyone received certificates and enjoyed some well-earned refreshments served by Hythe & District Inner Wheel.
75% of the sponsorship money raised will go to charities nominated by the walkers with the remaining 25% going to charities supported by Hythe Rotary.

Among the charities chosen by the walkers were:

The club was delighted to welcome the Mayor of Southampton who went along to wish the Headway group good luck, and the new District 1110 Governor Mary Pike who, along with her husband PDG David Pike, took an active part in marshalling and helping during the day.

But star of the show, undoubtedly, was Crispie Duck who participated in the walk along with his surrogate family, the Seabrights from Holbury, and was sponsored for around £500.

We use cookies to ensure that we give you the best experience on our website. If you continue without changing your settings, we'll assume that you are happy to receive all cookies on the Walk with Rotary. However, you can change your cookie settings at any time in your browser. Find out more.